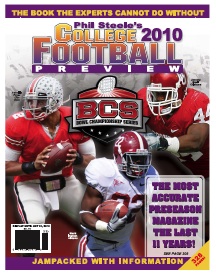 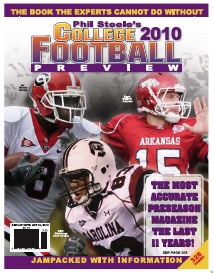 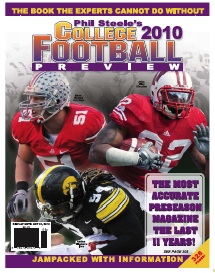 What They're Saying About Phil Steele
And His College Football Preview

“While Steele, like all of us, has had some notable busts over the years, in general, his are the most accurate predictions of any notable publication. The reasons are twofold. For one, he clearly puts more time and detail into this endeavor than any reasonably sane person (I believe they had to create a new font size to accommodate all the info he crams onto a single page). But more importantly, Steele, more so than most prognosticators, puts as much emphasis on trying to project forward as backward, on guessing how a team will mature and how it will fare against its given schedule rather than defaulting to how it did the year before.

A classic example came in 2008. I was still an AP voter at the time and clung firmly to my belief that a preseason poll should be treated solely as a "starting point." If a team finished the previous year No. 2 and returned 17 starters, it deserved to start the next season just as high. Hence, most other voters and I had Georgia (which fit that exact description) No. 1. Steele, on the other hand, went with Florida, a team that lost four games the previous year -- including a blowout to Georgia -- but had both potential and a more favorable schedule. Guess who was right?”
--Stewart Mandel, Senior College Football Writer SI.com June 2, 2010

"Your mag is the bible of college football!  I loved it as a fan, and have depended on it as a broadcaster. You are the best! Follow our broadcasting stuff on OhioBobcats.com.
--Russ Eisenstein "Voice of the Ohio Bobcats." August 9, 2010

“The annual is a book I tuck alongside my computer all season. Doesn't weigh me down so much either, now that so many schools elected to quit printing press guides. Merely scratching the surface took a few hours out of a rainy holiday, but it sure beats Mow Fourth. The $8.95 cover price is money well spent for anyone who follows the college pigskin.”
--Kevin Haskin, Topeka Capital-Journal, July 5, 2010

"It is clearly the most indispensable source I have. As Chuck Heston once said, they'll get mine by prying it from my dead, cold hands."
-- Tim Griffin, ESPN.COM Blogger

"I have been broadcasting JMU football since 1981 and there has never been a better preseason guide to FCS, Division 1-AA football, than this year's Phil Steele's ACC/Big East College Football Preview!"
-- Mike Schikman, WSVA-am Harrisonburg Va-host of Speaking of Sports

"(Phil) was right on time and such a joy to interview. His magazines certainly reflect his knowledge and personality, not only do they both provide information like no other, but he gets you excited about college football whether its talking to him or reading his magazines." -- Gattis Hodges, First Media Radio-WDLZ 98.3 Murfreesboro, NC 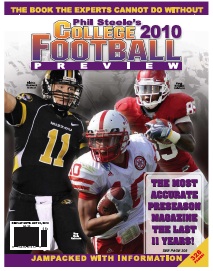 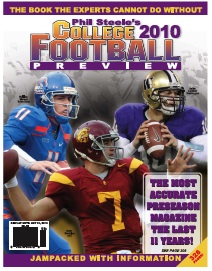 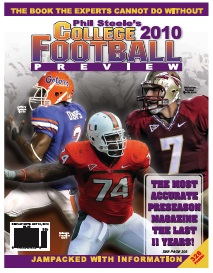 "Each year I get excited around May-June when Lindy's and Athlon's mags come out. This is the first year I bought Phil Steele's and I bought both his National and SEC mags after hearing him on Rivals Radio. The others came out first and I I've had them awhile but haven't looked back at them since I got PS's. I picked up one of the other ones the ... other day, and it seemed like editorialized drivel--kind of like someone reading their 7th grade "Science" book after getting a phD in Biochem. Now if you'll excuse me, I've got to go check out the injury updates at philsteele.com "God Bless PS!"." -- Charles Saucier

"learning about Phil Steele is like when Morpheus gave Neo the red pill and woke him up...you quickly realize there are magazines and then there is Phil Steele...I woke up in 2004 and have been an avid reader ever since...you will never be sorry..." -- Austin Harrison

"Thanks your magazine is my football bible. It comes in handy every time I watch a game. I am already on my second copy, since the first
one has been opened too many times." -- Jesse Gleaton

"Phil, I have enjoyed your CFB preview every year for the past 6 years. It's a tradition that I buy it in the summer time before I go on vacation and read it with my feet in the ocean at the edge of the beach. Every one of my mags have wrinkled pages where i was hit with an unexpected wave. I keep them by my couch during football season, and refer back to them on a weekly basis."
-- Jamie Marcum via Facebook 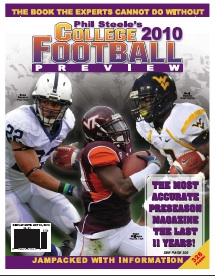 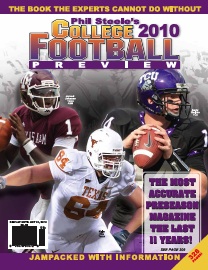 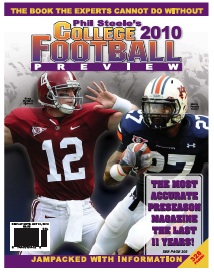 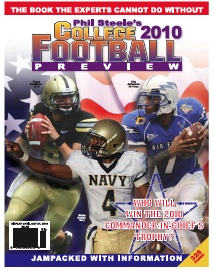